Sunday's lection is about choices. More importantly, it is about choosing God’s Kingdom over the Kingdom of Rome. It is--at its most fundamental--about taking sides with those whose only hope is God and rejecting Pax Romana, its pater familias, its peace based on war, its systems of patronage. Foxes having holes and birds having nests allude to the imperial family and its domain-- the basic hierarchical unit of society--that provided food, clothing, shelter, safety, security, and honor. Those who follow the "homeless" Son of Man are members of a different oikos, God’s oikos where widows, orphans, and strangers are the most privileged and where even the most unwelcome is always welcome. Yes, even beggars. Burial rites are again part of the rituals and obligations of the imperial family. Going and proclaiming good news to the poor, release to the captives, recovery of sight to the blind, to let the oppressed go free, and to proclaim the year of the Lord’s favor, God's jubilee of justice, takes priority.Anyone who has put a hand to the plow knows that looking back is unacceptable. The one who has decided to become a farmer in the Kingdom of God but yearns to go back to farming for the Kingdom of Rome, the complete opposite direction, is not fit to follow Jesus. The song we learned in Sunday School is true. There is no turning back. Those who think that following Jesus of Nazareth is easy, rewarding, and will bring us closer to heaven are following the wrong Jesus. #25percentrevolution#JusticeForMyanmar#JusticeForNewBataan5#FreePalestine#EndTheCultureOfImpunity#IAmWithJesus 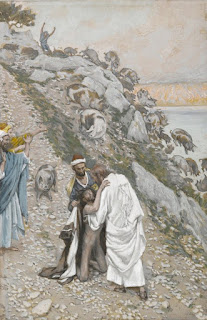 Sunday is Father's Day. We learned early in school that the family is the basic unit of society. The familia, with the father as its head, go back to the Ancient Romans. The father had absolute power over everyone in his family. Absolute meant exactly that: the father can disown, sell, even kill his children. For many fathers in antiquity, children were property. Possessions. For the Ancient Romans, the emperor was the father of all fathers. For the emperor, occupied peoples and nations were property. Possessions.Sunday's lection from Luke (which is also found in Mark and Matthew) possibly echoes the Roman army's massacre of Jewish rebels in Gerasa by Vespacian's general, Lucius Annius, around 67 CE. The "occupying forces" who possessed the Gerasene in the narrative is named Legion (which was the largest military unit of the Roman Army). Jesus's exorcism reminds us, especially those among us who are fathers, that people are not property nor posessions. Especially not our children. And if we think they are, then we need an exorcism. Sunday is Father's Day. It can also be Exorcism Day.#EndTheCultureOfImpunity#JusticeForNewBataan5#JusticeForMyanmar#FreePalestine#25percentrevolution*art, "Jesus, the Gerasene, and the Unclean Spirits," James Tissot, Brooklyn Museum (available at vanderbilt divinity library digital archives).
at June 17, 2022 No comments: 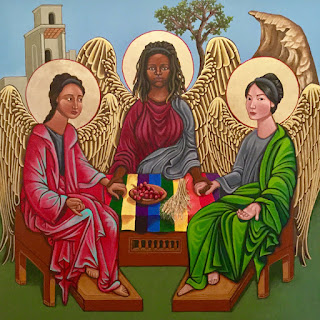 June 12th is Trinity Sunday and many homilies will focus on explaining a mystery. (Of course, a lot of us know that this "mystery" was discussed, debated, formulated, and eventually enforced around the 4th century by privileged, propertied, and powerful Christian men.) Many of us grew up with these centuries-old doctrines that made our heads hurt. Many of us grew up with doctrines that did not make sense, that created walls instead of bridges, that separated peoples instead of bringing them together, that made our faiths, our beliefs, our skin color, our sexual orientation, our class, our way of life sinful, less human, and, outright wrong!There are still so many people who are convinced that the hardships they face every single day are tests and trials from God. There are more who believe that God has a grand plan just waiting to be disclosed in the future, if not on earth then in the hereafter. There are those, quoting scripture no less, who sincerely proclaim that every elected official, including tyrants, dictators, and children of tyrants and dictators, are God's chosen.Then there are those who ask, in the midst of so much senseless suffering, sickness, hunger, poverty, greed, death, and destruction, how God chooses whom God heals, rescues, and saves. June 12th is Trinity Sunday and many homilies will focus on explaining a mystery. June 12th is also Independence Day in the Philippines. Maybe some homilies will focus on breaking free. #25percentrevolution#ChooseJustice#EndTheCultureOfImpunity#IAmWithJesus#JusticeForMyanmar#JusticeForNewBataan5#FreePalestine*art, "Trinity," Kelly Latimore, 2016 (available at the vanderbilt divinity library digital archives)
at June 10, 2022 No comments: 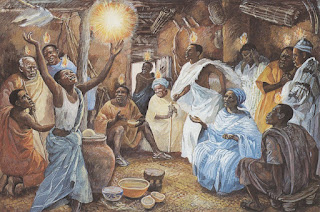 Philip's request to Jesus resonates with what many among us long for: "Show us the Father and we will be satisfied!" Some ask this question in the comforts of their armchairs inside their air-conditioned offices. Tens of millions ask this as they struggle to survive from one day to the next.Where is God? One seventh of one year's income from the richest 2,000 people on earth can eradicate poverty while 25,000, 40% of them children, starve to death every single day. Where is God?The world's richest countries spend close to 2 trillion dollars a year on weapons of mass destruction when less than a third of that amount can provide basic education, health care, and decent housing for the poorest nations. Where is God?
Those of us who call ourselves Christian believe in the incarnation. Where is God? Among us. Between us. One of us. Often a stranger. Human. Anywhere and everywhere we experience goodness wrestling free from evil; where we find hope being triumphant over despair; where we encounter faith stronger than fear; where we see love chosen over indifference; where we experience life rising up in the midst of death. #25percentrevolution#IAmWithJesus#EndTheCultureOfImpunity#JusticeForNewBataan5#JusticeForMyanmar#FreePalestine*art, "Pentecost," JESUS MAFA, 1973, from the vanderbilt divinity library digital archives.
at June 03, 2022 No comments:

A MAN AND HIS MAT 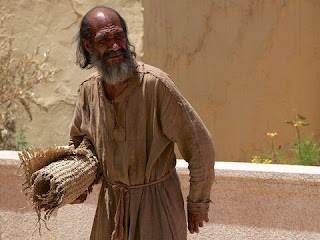 Sunday's lection from John 5 reminds me of Linus Van Pelt and his security blanket. Linus's relationship with his blanket started on June 1, 1954! (Our clan has had a love affair with Charles Schulz's Peanuts Strip that now spans three generations.)The man in the narrative has had a relationship with his mat almost four decades; 38 years to be exact! Note that the narrative begins with the man lying ill on his mat and ends with the man made well, standing up, and walking with his mat. (Structural exegetes will have a field day dealing with this pericope!)I am pretty sure that many people asked Schulz to do a strip where Linus eventually lets go of his security blanket. I am also pretty sure that many people probably expected Jesus to tell the man to let go of his mat. In sickness and in heallth, even Jesus celebrated the man's special bond with his mat. One person's junk is another one's treasure. We all have "mats" that we hold dear, that accompany us through the highs and lows of our lives, that make us feel safe, secure, at "home."Dear Friends, I am pretty sure that many of us have been lying on our mats, feeling terribly ill, since the May 9th National Elections. Soon, we will hear a still small voice, whispering: "Stand up, take your mat, and walk!"#IAmWithJesus#JusticeForMyanmar#FreePalestine#StopTheKillingsPH#EndTheCultureOfImpunity#JusticeForNewBataan5

*image from freebibleimages (Jesus and the Lame Man at the Pool of Bethesda). 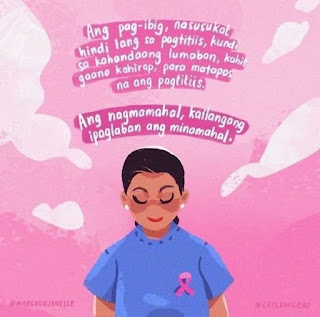 Most of us were taught the 50% plus one formula. We call this the "Majority Rule." These days, the popular term is "Silent Majority." History and research show us a totally different reality. A committed minority, relentless and dedicated, needs to reach 25% of the population to reverse the majority viewpoint. This committed minority, relentless and dedicated, by modeling behavior--repeatly and consistently--eventually leads the rest to copy such behavior.Dear Friends, do not forget this. Ever. The Jesus Movement began with Twelve. Sunday's lection reminds us of the behavior that eventually changed the world: love for others, especially the least, the lost, the last, and the left out. Bonifacio had 30,000 Katipuneros. Each one of them ready and willing to die for our Motherland. Each one believing that love for country is the same as love for God. The Pink Movement, committed to solidarity, volunteerism, and genuine transformation, has 15 million! That's already 25% of the voting population. The 25% REVOLUTION has begun!
====================*The 25% Revolution—How Big Does a Minority Have to Be to Reshape Society? [The Scientific American]
at May 12, 2022 No comments: 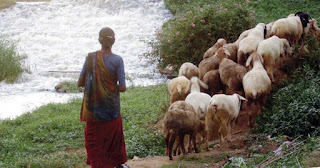 I am willing to bet that most of us know Psalm 23 by heart. We are not talking about one or two verses here. This is a whole chapter from the Bible that most of us know! This is one chapter that gave courage to so many when they were afraid. This is one chapter so many people held onto when they crossed over to the life beyond. Shepherd works as a metaphor for God in the psalm. The good shepherd will never abandon the sheep. The sheep will never, ever, be alone. In Sunday's gospel lection, people gather around Jesus and ask, "How long will you keep us in suspense? If you are the Messiah, tell us plainly." These people expected a male leader who will lead them to victory. These people expected a strongman who will destroy the Romans and restore the former glory of the monarchy. These people expected a leader who will make sure that the people who put him in power are rewarded handsomely. Jesus responds by talking about sheep and shepherds. Sheep do know the voice of their shepherd. Sheep do follow their shepherd in and out of the sheepfold. Sheep do run away from those whose voice they do not know. Shepherd works as a metaphor for Jesus in Sunday's lection. The good shepherd wil never abandon the sheep. The sheep will never, ever, be alone. Our country does not need a messiah nor a strongman. We need a shepherd. Lest we forget, then and now, women make up more than half of the world's shepherds. Let's stop imagining that the good shepherd in the Bible has to be male. Rebekah, Rachel, Miriam, Zipporah and her sisters were shepherds. The shepherds who visited Jesus when he was born were probably all women. Most importantly, many faith communities celebrate Mary--the mother of the Lamb of God--as a shepherd!Friends, the good shepherd is a woman. On May 9, let's elect a shepherd!
at May 05, 2022 No comments:

Sunday's lection is about choices. More importantly, it is about choosing God’s Kingdom over the Kingdom of Rome. It is--at its most fun...